I originally got this recipe from Weight Watchers – I can’t remember where – and I’m sure when done “properly” it’s a lower fat pizza – but I’ll leave that up to you to figure out 😉 I’ve changed it so much over the years that I really can’t remember what the “healthy” version is!

So you can either start with a store bought pizza crust (like I did) or make your own (THIS recipe is fantastic!) and then put any type of BBQ Sauce that you like on the crust – I LOVE Sweet Baby Ray’s (even if it has High Fructose Corn Syrup in it – boo…) I think I usually use about 1/2 cup – but do as much as you’d like 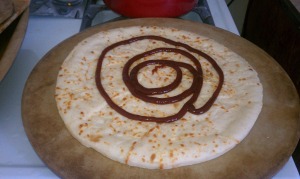 Spread the sauce over all of the dough – if you like a clean crust than make sure you leave room for that – I don’t care much, so I put it ALL OVER 😉

Take one package of Turkey lunch meat and slice it up – I just use scissors and cut it all at once – super fast! layer it over the bbq sauce. 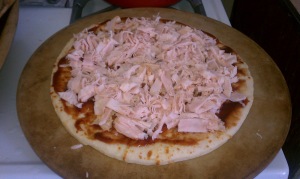 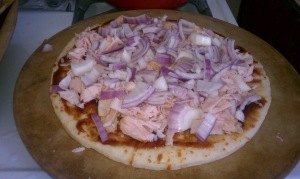 I then give it another layer of BBQ Sauce – again do as much as you like – if you like a saucier pizza – than do more – if not do less. Obviously you can tell that I just squirted it out of the bottle onto the pizza

I then bake in the oven at 350-400′ for 25-35 minutes – I usually like the cheese a little more brown than this turned out today. I also bake it on my Pampered Chef Round Stone so the crust is nice and crispy!

Let me know if you try this pizza – it’s one of our favorites!!

Make it a GRATE Day!